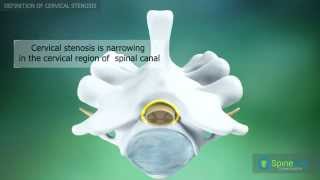 What is Cervical Stenosis?

Many people with Cervical Stenosis have suffered some type of trauma or injury to their neck, but their injury may have occurred months or years before they begin to develop symptoms of Cervical Stenosis.

To understand what happens in Cervical Stenosis of the spine, it's necessary to understand the process of disc degeneration. This is a "wear and tear" process. To help you get a better idea of what happens in your spine, think about two vanilla wafers with a marshmallow between them. The wafers represent two vertebrae and the marshmallow represents an intervertebral disc. If you squeeze the wafers, the marshmallow has some "give" because it's fresh and pliable. It's soft like a pillow. If you leave the marshmallow out on the counter for a week, it will dry out. If you put it between the wafers after it has dried out, it isn't soft and won't provide the cushion for the wafers like it did when it was fresh. It may even split or tear. If you left the marshmallow out for a year, it would be so shrivelled and dry, it wouldn't be any good as a "shock absorber" at all. This is similar to what can happen in Cervical Stenosis.

As the body ages, and Cervical Stenosis occurs, the intervertebral discs lose some of their water content. This means they become dehydrated and lose some of their ability to act as shock absorbers and tears may occur in the outer ring of the discs. These tears in the outer ring may not cause any symptoms, so the person may not be aware an injury leading to Cervical Stenosis has occurred. These tears heal by laying down scar tissue which is not as strong as normal disc tissue. As more tears occur, more scar tissue is laid down. More wear and tear injuries keep occurring as time goes on. As the disc ages, it becomes less of a cushion and eventually cannot function as an effective shock absorber.

Eventually, the disc starts to collapse and the space between the vertebrae shrinks. When the disc collapses, this also impacts the way the vertebrae line up with each other. When the bones don't line up like they are meant to, there is less room in the spinal canal which leads to Cervical Stenosis and abnormal pressure is placed on joint surfaces, on the articular cartilage. The articular cartilage is the smooth covering over the end of bones where they come together in a joint. As time goes by, the abnormal pressure causes inflammation and arthritis to develop in the joints. Arthritis also leads to Cervical Stenosis.

Many people with Cervical Stenosis even though it may be severe, do not know they have the condition. It is apparent on x-ray findings in 5% of all adults. Cervical Stenosis occurs in 7% of people who are at least 50 years old and in 9% of adults over the age of 70 years.

Cervical Stenosis is usually caused by age-related changes in the size and shape of the spinal canal. Everyone experiences some degeneration with aging. People aged 50 years or older are at an increased risk of developing degenerative arthritic changes. As a person ages, the vertebral disc loses some of its water content and, as a result, loses some of its shock absorbing ability. As the disc continues to wear down, it begins to collapse, making the space between each vertebra smaller. The collapse also affects the way that the facet joints (the joints at the back of the spine) line up. Over time, this wear and tear damage from Osteoarthritis of the spinal bones can prompt the formation of bone spurs. As the bone spurs form, the size of the spinal canal becomes smaller and soon may begin to press on the spinal cord or its nerve roots.

Certain factors increase the risk of developing Cervical Stenosis. They include:

If Cervical Stenosis is left untreated, or on rare occasions, treated too late, the patient may have the following complications:

An examination by a physician can confirm these findings and the doctor may also note that the reflexes are hyperactive as well.

It's vital to determine the cause of a spinal cord problem because if the problem is corrected early, spinal cord function may be restored either partially or fully. Prolonged compression of the spinal cord may result in permanent damage and disability.

Over time, the pressure on the spinal cord as it runs through the cervical spine can cause the following Cervical Stenosis symptoms:

These Cervical Stenosis symptoms should be taken seriously and immediate consultation with a physician is warranted. If treatment is not sought, the spinal cord can become more compressed and more severe symptoms could develop, such as paralysis in one or more limbs or other bodily functions may shut down.

Your doctor may request X-rays to check for signs of Cervical Stenosis. These may show some signs of degeneration in the facet joints or disc spaces.

Magnetic resolution imaging: An MRI of your neck might be recommended if your doctor suspects Cervical Stenosis. These images enable your physician to see any structures that may be pinching or compressing the spinal cord or the nerves. Sometimes a dye is injected to allow further imaging and this is then followed by Computerized Tomography (CT scans).

Computed Tomography (CT) scan provides excellent detail of the bony tissues and some information about central soft-tissue abnormalities. The use of intravenous contrast agents improves the soft-tissue resolution significantly. The use of intrathecal contrast introduces some increased risk of injury, the risk of infection, and added expense. This should be limited to trauma cases and to those patients who have contraindications for MRI.

Electromyogram [EMG] and nerve conduction studies: These special studies can help your doctor distinguish if your pain is being caused by Cervical Stenosis or if it might be from other disorders such as Carpal Tunnel Syndrome. Some tests such as can study the conduction of signals through the spinal cord, and other tests study the signals sent to and from the nerves and muscles.

In some cases, the first cervical spinal stenosis treatment recommended is the immobilization of the neck. This can help decrease inflammation and pain. You may be instructed to limit your daily activities and to avoid all repetitive movements of the arms, neck and upper body. Your doctor may also want you to wear a soft neck brace for Cervical Stenosis. This brace is a padded ring that fits around the neck and attaches with a Velcro closure. It is usually worn during the day for up to three months, then the amount of time-worn is gradually decreased as your symptoms of Cervical Stenosis resolve.

Physical therapy is also sometimes recommended for Cervical Stenosis. The first cervical spinal stenosis treatment of therapy is aimed at pain control and relief of inflammation. Electrical stimulation therapy can help to relieve muscle spasms caused by cervical stenosis. Traction is sometimes used to gently stretch the muscles and joints. This can be accomplished by the therapist using a hand traction pull or with a special head halter designed for treating spinal conditions like Cervical Stenosis.

If conservative cervical spinal stenosis treatments are not successful in treating your Cervical Stenosis your doctor might recommend surgery. There are different types of procedures that can be used to treat the cervical stenosis. The goal of different surgical decompression techniques is to relieve pressure on the spinal cord by widening the spinal canal and removing the source of the compression. All surgical procedures come with a certain degree of risk, so your surgeon will discuss with you which option is most appropriate for your cervical stenosis.

The main goal of a cervical spinal stenosis treatment will be rest. The patient may be able to walk with assistance within 24 hours after surgery. Activity is gradually increased over the course of the first 3 days. and patients are typically able to go home within a few days after the procedure, depending on the extent of the surgery. Adequate rest is still recommended once the patient is sent home. Some degree of pain and discomfort may be experienced during recovery. For this reason, patients are prescribed with oral analgesics. However, symptoms should begin to subside within a week or two after surgery. After two to four weeks, most patients can return to work or school and will no longer need their prescribed pain medications. Complete recovery typically occurs between two to six months after cervical spinal stenosis surgery.